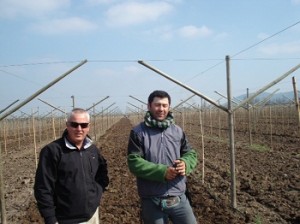 Chile Table Grapes technical advisor Nicolás Díaz Figari, sheds light on a system which has been improving the quality, yields and reducing labor costs for the country’s table grapes over the last four years.

Díaz Figari tells www.freshfruitportal.com how he came across the idea while visiting a fellow Chilean in Petrolina, Brazil.

His compatriot was using a Californian technique for producing white seedless Thompson grapes in the San Francisco Valley.

After analyzing the system, an adaptation of Open Gable, Díaz Figari came up with the idea of modifying it take on the form of a Spanish vineyard.

His system is a frame of poles and wires which bear most of the weight of the fruit, giving support to the vines.

The frame streamlines lightly so vine leaves get optimum exposure, while it also keeps the fruit and leaves separate. This allows for efficient use of pesticides, reduces fungal infection rates and improves air circulation.

He developed the system with the help of Grape Advisory Committee agronomist Eduardo Pastor, and agricultural technicians Mauricio Galvez and Sergio Araya.

Díaz Figari says his adaptation, known as EG (Español y Gable), was devised to respond to the industry’s need for higher yields and brighter and healthier grapes.

“It is more than a market trend it is a way of cutting costs and getting better yields and a solution to the more complicated issue of labor which is becoming a pricer and scarcer resource.”

He explains that a v-shaped frame is placed over 1.6 or 1.7 meter high poles with cross-heads made of pine or eucalyptus to support the fruit.

Díaz Figari says EG saves on labor costs because it reduces the number of days per hectare needed for harvesting the grapes and speeds up production.

“In the second year you can produce 2,000 cartons per hectare and by the third year you can easily produce between 3,000 to 4,000 of Red Globe grapes,” he explains.

He adds that soil type, rootstocks and varieties also affect the grape density of a site.

He says in tests the first crops of Red Globe were 10 days earlier than the control using the Spanish vineyard system and yields were more than three times higher at 2000 boxes as opposed to 600 per hectare.

“We have seen that the system produces fruit earlier, clearer and that this open system fosters a better quality of light,” says Díaz Figari.

He adds the system can also be covered with plastic to protect grapes from late rains from March to April in central Chile.

About 150 hectares of grapes were planted in Valle de Copiapó, Ovalle, Combarbalá, Paine and Rancagua last year using the system in collaboration with agronomists Eduardo Pastor and Carolina Cruz.

They expect producers can use this system, or a similar one, to upgrade their vineyards and lower their production costs.